This small, wood-burning, locomotive was used in the pre-war years to haul rail cars loaded with sugar cane from the fields that covered the island to the processing mill in Chalan Kanoa. The extensive island-wide railroad system (with about 50 miles of track) was built by the South Seas Development Company over a number of years. This rail line, often traversing rugged terrain, was a key part of the sugar industry and an impressive engineering achievement. Island residents often rode on the rail cars to get from place to place as private automobiles were very few in number during the Japanese administration. For many years, this locomotive was on display outside the old U.S. Navy fire station at the base of Navy Hill and was moved to its present location in 1962. It is the only locomotive on Saipan not sold for scrap in the 1950s. Its cab has been renovated twice – once in 1975 and a second time in 2013. The remainder of the locomotive is original. The flat car behind the locomotive was used to carry sugar cane. 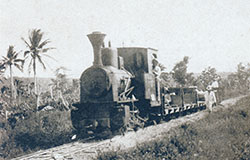 A sugar train locomotive pulling cane cars in the 1930s.