“An enduring link to Saipan’s Shinto past”

The Saipan Jinja (Shinto Shrine) was built in 1931 at the base of a small hill that the Japanese named Katoriyama (Mount Katori). The Saipan Shrine replaced the older Katori Jinja which had been established on the top of Mt. Katori in October 1914. In 1916, the original Katori Jinja was damaged by a strong typhoon. It was then moved half-way down Katoriyama and placed in a small natural cave (which can still be seen today). In 1931, Haruji Matsue, the “Sugar King”, requested permission to build a bigger shrine to serve a rapidly growing Japanese population on Saipan. Permission was granted and the new jinja was completed that same year. It was renamed the Saipan Jinja. During World War II, Katoriyama was the site of a battle between Japanese and U.S. forces. Resulting shellfire caused the Saipan Jinja to burn to the ground. Today, the only surviving original elements of this shrine are the base of a lantern and a vertical stone that bears the name of the shrine. In 1985, the Katori Shrine Association received permission to rebuild a new jinja at the site of the former Saipan Jinja. It was named the Saipan-Katori Jinja. Please respect this site as it is an active shrine. 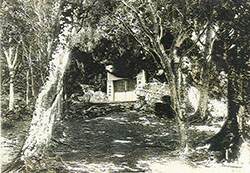 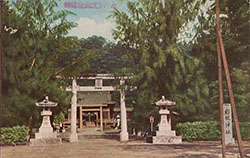