In 1904, the German District Administrator, Georg Fritz, erected a Japanese-style home at the base of a small limestone hill that is now a part of Sugar King Park. He then built a concrete stairway that led from the back of his house to the summit of the hill. Here Fritz constructed a flag tower that he used to communicate with visiting ships (that anchored outside the reef immediately west of Garapan Village) using semaphore, a flag coding system. This tower also served as a lookout station that provided an excellent panoramic view of the village and the western coastline. Following the Japanese occupation of the island in 1914, Japanese naval forces used this stairway to access a small Shinto Shrine, the Katori Jinja, which was erected atop the hill. The Japanese named the hill Katoriyama (Mount Katori). A section of the stairway has survived and may be seen on the eastern side of the hill. Care should be taken when approaching its eastern end of the stairway, as the base of the hill was quarried during World War II resulting in a steep drop of more than 10 meters. This stairway is the oldest surviving historic structure on the island of Saipan. 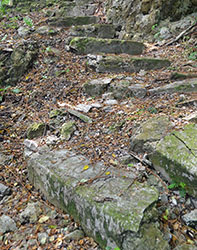 The stairway leading to the German flag tower.