Punton Muchot is a sandy point of land that juts into the Saipan Lagoon just south of Tanapag channel. Ancient Chamorros constructed their villages in this general area in the centuries before the arrival of Europeans. In the early 19th century, Punton Muchot was the landing place of Aghurubw, the legendary Carolinian chief and navigator credited with establishing the first Carolinian settlement on the island. According to oral history, Aghurubw covered his canoe with Beach Morning Glory vines known in Carolinian as arabwal. Later, when the first village was established to the south of Puntan Muchot, it came to be called Arabwal after this plant. Carolinians referred to Puntan Muchot as Ppiyal Ooláng (“sandbar where they looked up at the sky”) since Carolinian navigators often consulted the stars and weather from this beach before leaving on canoe voyages. It was and still is used as a location to perform the Carolinian ritual of fiiróurów which involves burning the possessions of a recently deceased person. This ritual marks the departure of the deceased’s spirit and the official end of the grieving period. Today, this area is commonly called Micro Beach and is a popular picnic and swimming location. As a traditional sacred place, please treat this area with respect. 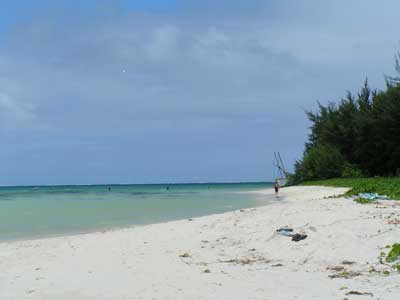