A single gatepost of the Nan’yô-ji (South Sea Buddhist Temple) stands on the southeastern corner of the Fiesta Resort and Spa Hotel. The Nan’yô-ji was founded in 1932 by the Reverend Kankô Aoyagi. Buddhism was introduced to Japan in the 6th Century via Korea and has co-existed and intermingled with Shinto, the indigenous religion of Japan over the centuries. It is practiced in several forms or schools. The Nan’yô-ji was associated with Jôdo-shû, a branch of “Pure Land” Buddhism derived from the teachings of the Japanese monk Honen. It is the most widely practiced branch of Buddhism in Japan. The inscription on the gatepost reads “Jôdo-shû, Taho-zan, Nan’yô-ji”. In 1936, at the urging of Aoyagi, the private Saipan Domestic Science Girls School was established immediately north of the Nan’yô-ji. This school was transformed in April 1939 into a public four-year Girls High School, one of two government run girls’ high schools in all of Japan. This school was destroyed during World War II. In 1976, a modern tourist hotel was built on the site of the Nan’yô-ji and the Japanese Girls School. The gatepost is the sole remnant of these sites to survive post-war development. The modern marker to the left of the gatepost reads “Taho-zan, Nan’yô-ji, Kankô Aoyagi, Founder”. 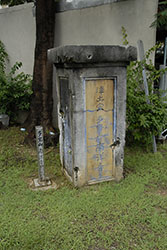